Home / How To Start A Conversation With Your Buyers: Opening up a sales letter 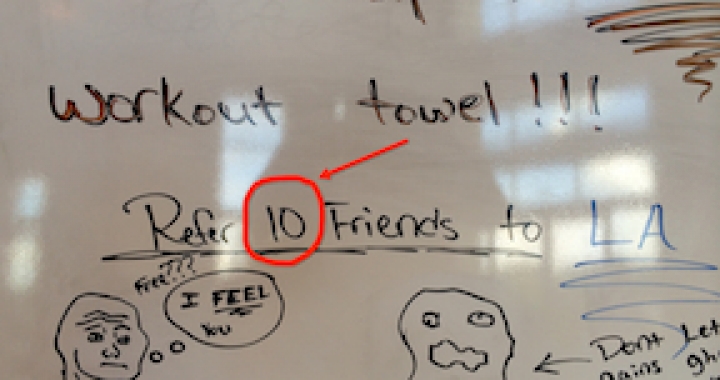 How To Start A Conversation With Your Buyers: Opening up a sales letter

Hey, before we get into today’s tip, I just want to catch up on something we talked about last week.

We talked about what an abysmal job LA Fitness was doing, at generating leads: 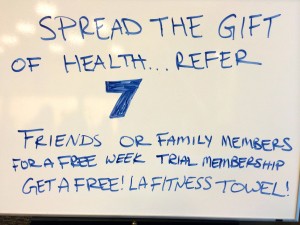 Anyway, clearly… no one at LA Fitness is reading this blog. Because Monday morning, this was the first thing I saw when I waked into the gym:

Man, talk about going from bad to worse!

Do you think there’s actually someone out there working their balls off to refer 10 people to a gym, so they can get a free $1 towel?

Anyway, better them than us, right?

When it comes to copywriting, I find myself reading more books from the 1950’s through the 1970’s than anything else.

I’m not sure but I think advertising in general changed after that, and branding became more of an emphasis than messaging.

Messaging, post-1970, seems to have been relegated to a small sub-class of direct marketing cultists like you and me.

One of these books I’d encourage you to read is called Making Ads Pay, by John Caples.

In Chapter 11, which is called “Ten Ways To Write The First Paragraph,” he goes through ten different ways (Surprise!) to open up a sales letter.

Let’s talk about some of these openings. Like this one, which is actually #1:

Continue The Thought In The Headline:

I use this one a lot, primarily because when you use this, you’re not taking much of a gamble. And when it comes to writing… I like playing it safe.

In other words… if your headline says something like, “How To Crack Open Peanut Shells Without Making A Mess”…

And you open up your first paragraph with something like:

“Cracking open fresh peanuts is such a mess! It seems like no matter how careful you are, you always wind up with a lap full of peanut shavings, red skins… and small bits of shells, to brush off later.”

Nice and smooth, isn’t it?

And that’s because your opening line is simply a continuation of the initial headline which attracted their attention in the first place.

Obama’s Next Scheme After Healthcare: Your RETIREMENT!

“If you are sick and tired of the Obama-led government deciding how you should be spending YOUR money, then pay close attention to what I’m about to tell you. In fact… sit down and take a deep breath before you start reading this, because if you’re anything like me… you’re going to be outraged at whats about to happen to your retirement funds — whether you like it… or not!”

Again, that was an easy transition, wasn’t it?

You don’t have to worry about if your reader’s going to “shut down” once they read your opening, when you’re basically just continuing the conversation you started with, in your headline.

It’s just like real life. You wouldn’t go over to a customer and say “Hey, I have a way for you to lower your life insurance premiums by over 75%,” and then follow up with something like… “Did you know spaghetti tastes great with clam sauce on it?”

So don’t do this in your sales letters, either.

If you have any thoughts on today’s post, or on anything worthwhile at all, for that matter… leave ’em below.