Home / I'm a lover not a fighter — picture enclosed.

I'm a lover not a fighter — picture enclosed.

Hey, it’s Friday and I just got back from a few days of relaxing and vacationing out at St. Pete beach. It was my last chance to spend some time with my daughter before she starts school next week. Plus, the rest of this month is a big crunch month for me, work-wise.

Here’s a picture of us taken yesterday at the pink hotel. Construction on the hotel was first started in 1925: 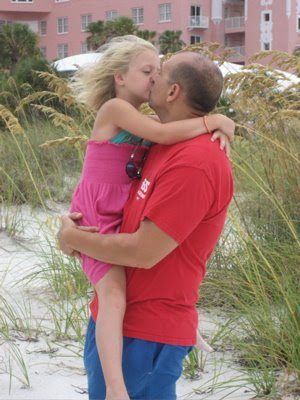 Now, for today’s tip, I’m going to “cheat” a little. As you may or may not know, I also run a separate list for another consulting business I’ve recently started with a former client of mine, Mike Miget. We’re putting together a series of programs for loan officers to grow their business.

In the last month since we started this business, we’ve already uncovered two new businesses for them, and this first project isn’t even finished yet (that’s what I’m working on the rest of this month).

Anyway, the other day I send out a very forward and somewhat controversial message to that list, and I thought you’d benefit from hearing it as well. I realize there’s some duplication from both lists, so if you’ve seen this already, mea culpa. I think the message is strong enough that even if you read it again, you’ll take something away from it. In any case, have a great weekend.

We’ve received a load of questions like this one, “Craig, I
want to get involved with the ARMs Marketing System you and
Mike are putting together, but I don’t have the time and
money for it right now. What do you suggest?”

Now before I answer this question, let me tell you a couple
of stories. See, I believe if you think about the answer
to the main character’s problem in each of these stories,
it will lead you to your own conclusion about what the
correct answer to today’s question is for you.

First one, woman… 28 years old. Great looking gal with
legs that go on forever. Lives with 5 other roommates in a
crowded small 3 bedroom apartment downtown in the West
Village, just a few blocks from her favorite store, Dick
Blick Art Materials over on Bond Street.

She’s an artist with the energy of a lion, but she’s never
been able to make any money at it. It’s not that she isn’t
talented, she just knows absolutely nothing about sales and
marketing. Because of this, even when someone wants to buy
one of her pieces, she usually undervalues her efforts and
sells it for just enough money to pay her rent that month
and keep her in full supply of paint, brushes, and canvas.

She loves what she does, but she’s not in denial about the
fact that she’s getting older and simply can’t go on living
this way much longer. At 28, she’s never even had her own
bedroom since she left her parents home to go away to
college.

But she’s about to catch a lucky break. One of her
roommate’s father owns one of the most prestigious art
galleries out on the west coast. He’s very familiar with
her artwork and he’s got a few fabulously wealthy buyers
who are coming into town next week. He knows he can sell
several dozen of her paintings for literally well over
one-hundred thousand dollars combined — more money than
she’s ever made in her entire career.

She’ll be able to finally get her own apartment and open up
a small shop of her own with this money. All she has to do
is fly out from New York to Los Angeles and arrange for the
transportation of all her artwork.

Sadly, she can’t do it. She has no money to pay for her
flight or to ship the artwork out to L.A.

She’ll never get a shot at something like this again…

Stereotypical New Yorker, talks fast, walks fast, makes a
whopping load of cash all the time. Started as a broker on
Wall Street, showed some good hustle, was the only one in
his team willing to do even more than his employer asked.

Shows up at 5:30 a.m. in the office every morning, long
before anyone else, works well into the evening, and
devours every daily business newspaper and monthly trade
journal he can get his hands on. The way he’s going, he’s
expected to fast-track and become the youngest executive
vice president ever in the firm’s history, and he’s also
the first one who’s done this that hasn’t come from old
money.

In fact, the kid grew up on the wrong side of the tracks.
He was raised by a single mom, working two jobs, raising
three kids on her own, her alcoholic ex-husband long gone.

One weekend after a vigorous run through Central Park, the
guy feels much more out of breath than normal. As the
evening wears on, he’s still feeling short of breath and
has increasing chest pains that just aren’t normal.

Checks himself into Mount Sinai that evening just in time —
at around 10pm that night, he experiences a massive heart
attack.

Doctors tell him if he wants to live, he’s simply GOT to
change his lifestyle. Unless he gets 8 or 9 hours of sleep
every night, minimizes his stress to almost zero, and takes
up hobbies and reads books that relax him, he’s going to
die in less than 30 days.

What should this guy do?

After all, he has no time to be healthy.

See, in life, we all have time, money, attention span,
strength, and compassion, for those things we want to have
them for.

I grew up in a housing project and everyone in these
apartments had more televisions than you can imagine, and
drove much nicer cars than I drive today.

Telling yourself, and then having the gumption to ask me,
what should you do if you have no time and money, means
you’ve either given up, you’re not serious, you’re too
cheap, or you’re scared of being successful or have some
other kinds of self-sabotaging issues related to money.

And while there’s nothing wrong with any of these things —
Lord knows I’m far from perfect — I’m not about to give
you a handout to fix any of them.

You fix these things by paying the same thing we all pay in
life, to move ahead. It’s called “tuition.”

And if you can’t of if you aren’t willing to pay the
tuition, then I suggest you go and get a nice cushy
government job, where the toughest thing you’re ever going
to have to do is sit and figure out how many days left do
you have to work, to start collecting your pension.

I wish you well.

Tough love and harsh reality, yes. Good food for thought
though, isn’t it?

P.S. If you like hard-nosed slabs or reality like this,
then make sure you test-drive Craig’s Seductive Selling
Newsletter, and get your 15 free bonus gifts at
http://www.kingofcopy.com/ssnl

In this month’s issue you’ll read the nitty gritty about life, and why “Sometimes There Are Just No Reasons Why,” and you’ll get TEN different marketing and sales critique examples.

Oh, and there are less than 30 days until the kickoff of our
ARMs Marketing Program for Loan Officers. Join us at

Comments? Leave them here on my blog — I want to know what you’re thinking.
And for all the King’s products, go to http://www.kingofcopy.com/products