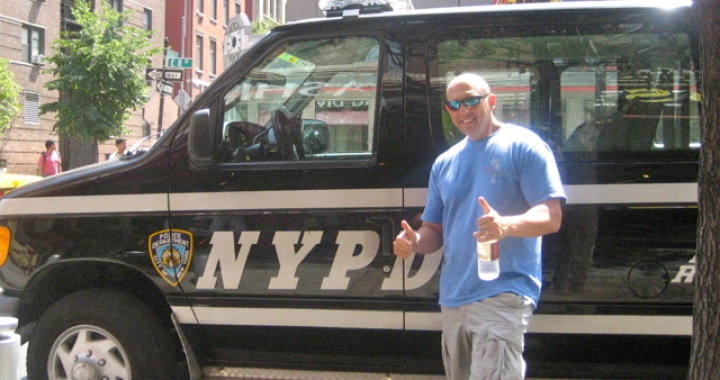 If you read the intro to my book, then you know two things about me:

One, that I didn’t get a particularly good start in life.

And second…you also know the two defining experiences of my life that basically shaped who I am today.

Earlier this week, I was reminded of something else that happened to me a long time ago. In fact, the story I’m about to tell you took place New Year’s Eve and New Year’s Day back in 1982.

And while I wouldn’t say this experience had the same kind of impact on me as those two defining moments in my book — it was pretty profound, nonetheless.

I got invited to a New Year’s Eve party out on Long Island.

I was in my first year of college, I was extremely immature, and I was also very angry at the world.

At that time, all I knew of the world was The Bronx, where I grew up… and the fairly dysfunctional comings and goings of what went on in my apartment. Going out to Long Island, was a big deal to me, because it was an affluent area (especially compared to what I’d been exposed to at the time) and I’d never been out there before.

The party was like any other teenage party you might find during that time. Parents weren’t home… tons of kids walking around drinking beer and smoking weed.

Bongs, empty beer, wine, and booze bottles, and torn bags of chips and Cheetos were sprawled all across the house. And of course, kids were in assorted states of inebriation in various and sundry positions throughout the house, as well.

Three firsts that happened to me that weekend:

1. Although MTV had been around for 8 years at that time… I’d never seen it.

See, we didn’t have cable television, so up until then… MTV was this sort of hidden mystery to me. Kind of like the Loch Ness monster or Bigfoot. Something you heard about, something everyone seemed to know about… but for me, shrouded in mystery up until that point.

And although I’ve never been a big fan of television, I was glued to the screen watching this mystery unfold. Because I’ve always loved music, I found the entire concept, extremely compelling. For the first time in ages, I was riveted to the television.

The closest I’d gotten to something like that, before… was watching Don Kirschner’s Rock Concerts on Saturday nights.

It was very cool, I thought.

2. I slept in a car in the FREEZING cold, overnight.

Although I’ve had multiple dogs for over 20 years now, back then, I was afraid of dogs — especially large ones.

I’d been attacked by large dogs (a Shepherd, and a Doberman) on two separate occasions, as a kid, and so… I had a fear of dogs at that time.

Well, there was a very large Shepherd in the house where the party was, but the dog had been locked away for most of the night.

Towards the end of the night, a few of us had stepped outside for a few minutes. And when we walked back into the house, suddenly… out of nowhere… this massive dog appeared.

At that particular moment, the party was winding down, and people were basically finding places around the house, to sleep. Couches, chairs, carpeted floors… whatever you could find, was your squatting ground for the night.

Well, I was scared shitless afraid of that dog.

I knew there was NO WAY I’d be able to sleep with that big dog prowling around. So, I ran back outside… found an open car door… and proceeded to curl up in the back seat.

It was, by FAR… the most uncomfortable, most difficult night I’ve ever had in my life.

There was snow all over the ground, and the temperature had to be somewhere in the mid-20’s. So, needless to say… I spent the lion’s share of the night expending energy trying to stay warm.

Which meant that when the morning came, I was pretty much a zombie.

3. Lastly — and this was what was so profound — this happened:

I left the party, hopped on the LIRR and back into Penn Station. For some reason, I didn’t want to take the cross-town train over to the east side, to get my trains back home… so I got out and walked across town.

And what I saw, is something I’ll never forget.

What I saw was…

I saw entire blocks, right in the middle of midtown Manhattan… that were completely empty. No people, no cars, no traffic… devoid of any kind of life, at all.

Not even a pigeon.

It was as if I’d just landed on earth after some kind of apocalyptic event had occurred, and no one had told me.

I was astonished, actually. And frankly, a little scared as well.

See, when you grow up in a place like New York City… and particularly in the Bronx… you learn… there’s safety in numbers.

This is why city people always feel out of place when they go out to the country, or to some rural farmland. Even though, aesthetically… places like this are simply beautiful — the lack of people makes city folks feel uneasy. On edge.

It took me a long time to get used to this, once I left, as well.

Now this may sounds strang, because obviously, you’re probably a LOT safer standing on some rural road out in the middle of the boonies somewhere… than you are in the middle of a crowded city.

But… as you know, we’re all creatures of habit. And, we get comfortable with those things we’re used to — whether they’re good for us, or not.

And anything outside of our comfort zone, typically makes us edgy.

I’d never seen the city so vacant and so absent of life, but on New Year’s Day — especially in the morning — that’s what you’ll find. Especially in the non-residential areas where there are primarily “big box” department stores.

It was an eerie feeling, but it made me realize something incredibly important.

See, up until then… in my young, angry, and pretty unsophisticated mind – I didn’t think people were important.

But seeing how spooky it was, with the entire city empty… made me realize just how important people were.

Now I have to be honest — it took a while longer — probably 10 years or so more, until I liked myself enough, that I could start liking others.

But that cold day in the middle of Manhattan, was what first opened my eyes and made me realize… (along with those two events I mention in my book), that things weren’t as they seemed.

That my outlook on life, probably wasn’t correct, and would need some adjusting.

And although it didn’t happen overnight — boy-oh-boy am I glad I made the radical adjustments I needed to make, to be a happier… and much healthier person.

How To Sell Almost Anything… To Virtually Anyone